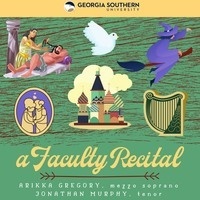 Professor of Voice Arikka Gregory and Lecturer of Opera Coaching and Collaborative Piano Jonathan Murphy are joined by pianists David Murray and Ken Chan for an afternoon of vocal music on February 23, at 5:00 pm. Selection will include an excerpt from Saint-Saëns’ Samson et Dalilá, German Lieder on the subject of witches and demons, songs of Rachmaninoff, and two rarely performed songs by Irish composer Muiris Ó Rónáin in the original Irish Gaelic.