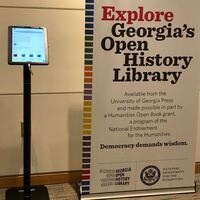 The Georgia Open History Library (GOHL) traveling exhibit will be on display at Zach S. Henderson Library on the Statesboro Campus from Sept. 12 to 26.

GOHL is an online library of nearly 50 digital editions of scholarly works and primary source documents which focus on Georgia's history, from foundation to statehood and beyond. These include: studies of Adams and Jefferson, the American Revolution in Georgia, the Creek Nation, papers of Revolutionary War General Lachlan McIntosh and the colony's founder James Edward Oglethorpe. Some titles focus on how Georgia navigated its relationship with Indigenous peoples and other political struggles of the time.

This exhibit features both printed books on physical display and the digital library, accessible by a tablet.