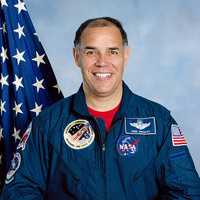 An Astronaut’s View of Choices, Influences, Contributions and Later Discoveries

Frederick D. Gregory is a former astronaut with NASA, a retired Air Force Colonel and was the first African-American man to command a space shuttle mission. Gregory has logged more than 400 hours in space and says his travels often led him to reflect. As he looked down on the Earth from above, he wondered what choices its people had been offered and taken; what goals they considered, evaluated and selected; what influences shaped their paths and what molded their characters. He believes that each choice taken — or not taken — has a profound effect on a person’s life, a belief displayed in his own life, which took him from his early days as a Boy Scout to a career as a space traveler.