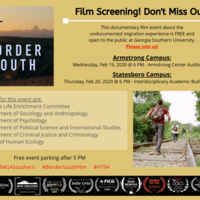 To stem the immigration tide, Mexico and the U.S. collaborate to crack down on migrants, forcing them into ever more dangerous territory. Every year hundreds of thousands of migrants make their way along the trail running from southern Mexico to the U.S. border. Gustavo’s gunshot wounds from Mexican police, which have achieved abundant press attention, might just earn him a ticket out of Nicaragua. Meanwhile anthropologist Jason painstakingly collects the trail’s remains, which have their own stories to tell. Fragmented stories from Hondurans crossing through southern Mexico assemble a vivid portrait of the thousands of immigrants who disappear along the trail. Border South reveals the immigrants’ resilience, ingenuity, and humor as it exposes a global migration system that renders human beings invisible in life as well as death”

College of Behavioral and Social Sciences